A viewer recommended this game to me. I know I'm behind on the curve but this so far has a lot of promise.
I might be ranting and raving throughout this game but don't let that upset you. I'm likely going to be playing through the whole game at this point. Excellent work Jayskibean. Keep at it!

I love this game!!! It is a basic game but is a perfect project for me. 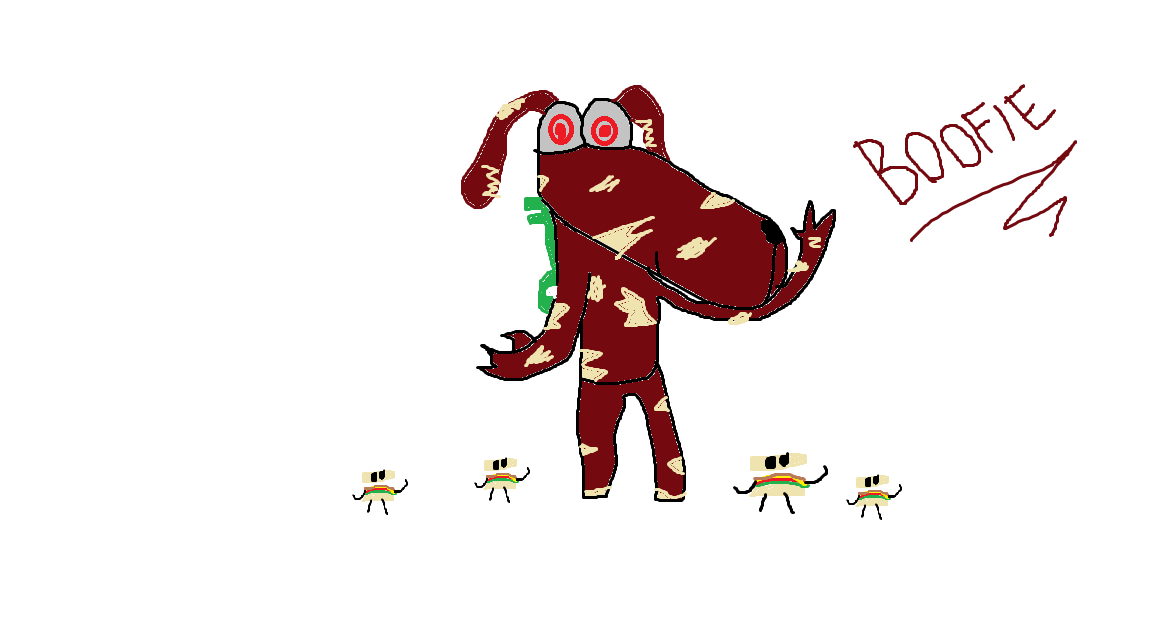 I saw them! They're very cool!

Reply
a baldi and boofie fan66 days ago

which one is the HUB menu again?

The menu that loads up when you start the game.

Reply
a baldi and boofie fan65 days ago

is it the mp4 file named 'BoofiesbunkerIntroMovie'?

I don't know where to post this, but I had some ideas for Chaos Mode characters. (Characters with a * are either non-canon or custom-made by me.)
- Visroc
- The Phone
- Calm Boofie* (doesn't attack the player but instead tells the player where Boofie/a random enemy is) (possibly for April Fools)
- Flippers* (If you run into him he'll give you a choice of 3 enemies of any difficulty to spawn into your run. It can be anyone except for those you haven't unlocked. Once you choose, he'll spawn the enemy in at 1, but every other time you run into him it goes up by 1 until it reaches 5.)

I can't download the game because I have MUGEN on my computer, and every .rar file I download instantly becomes a MUGEN file. Maybe if you made it a .exe file, I could and would play the game.

Not a glitch, Just something unnoticed. The credits sign doesn't exist anymore, So this photo in chaos and ultimate mode should be updated 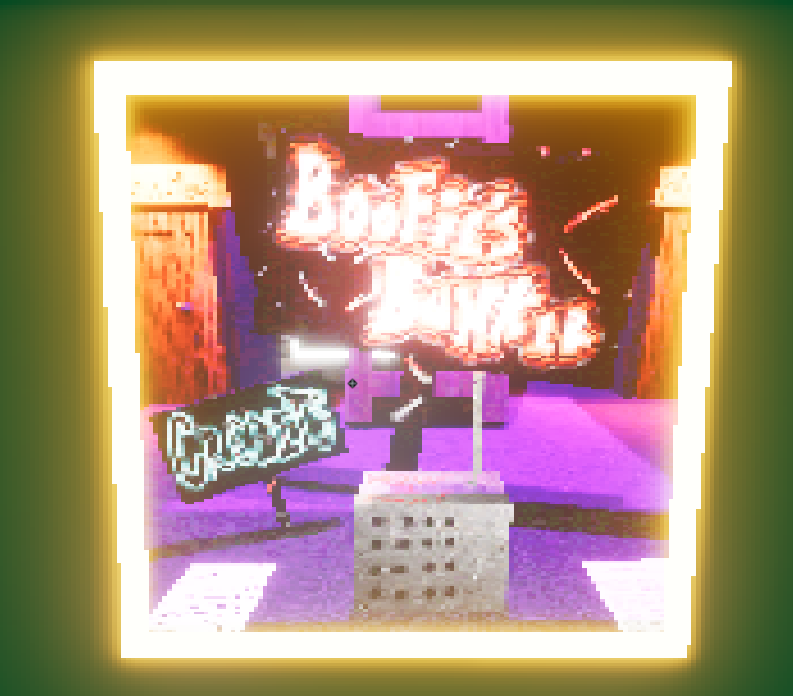 Meh. I'm not too worried about that, tbh 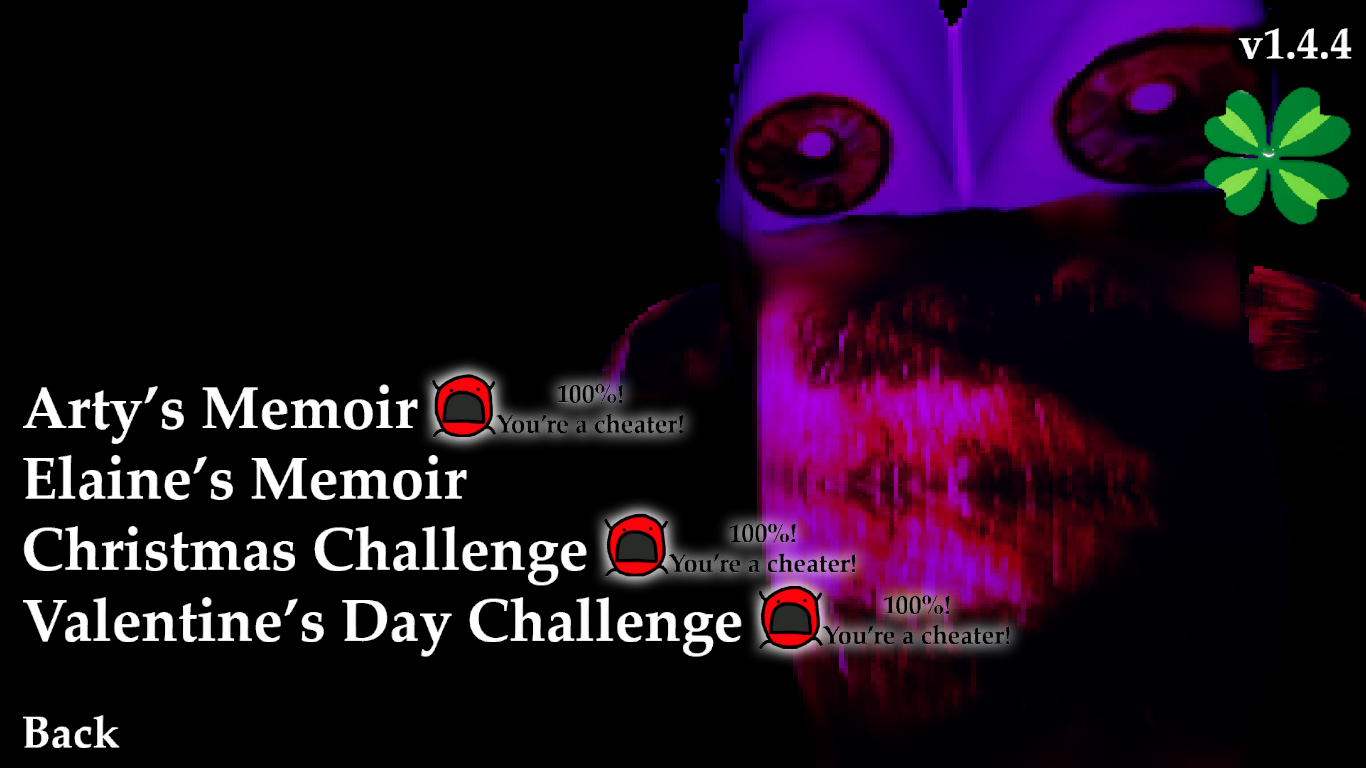 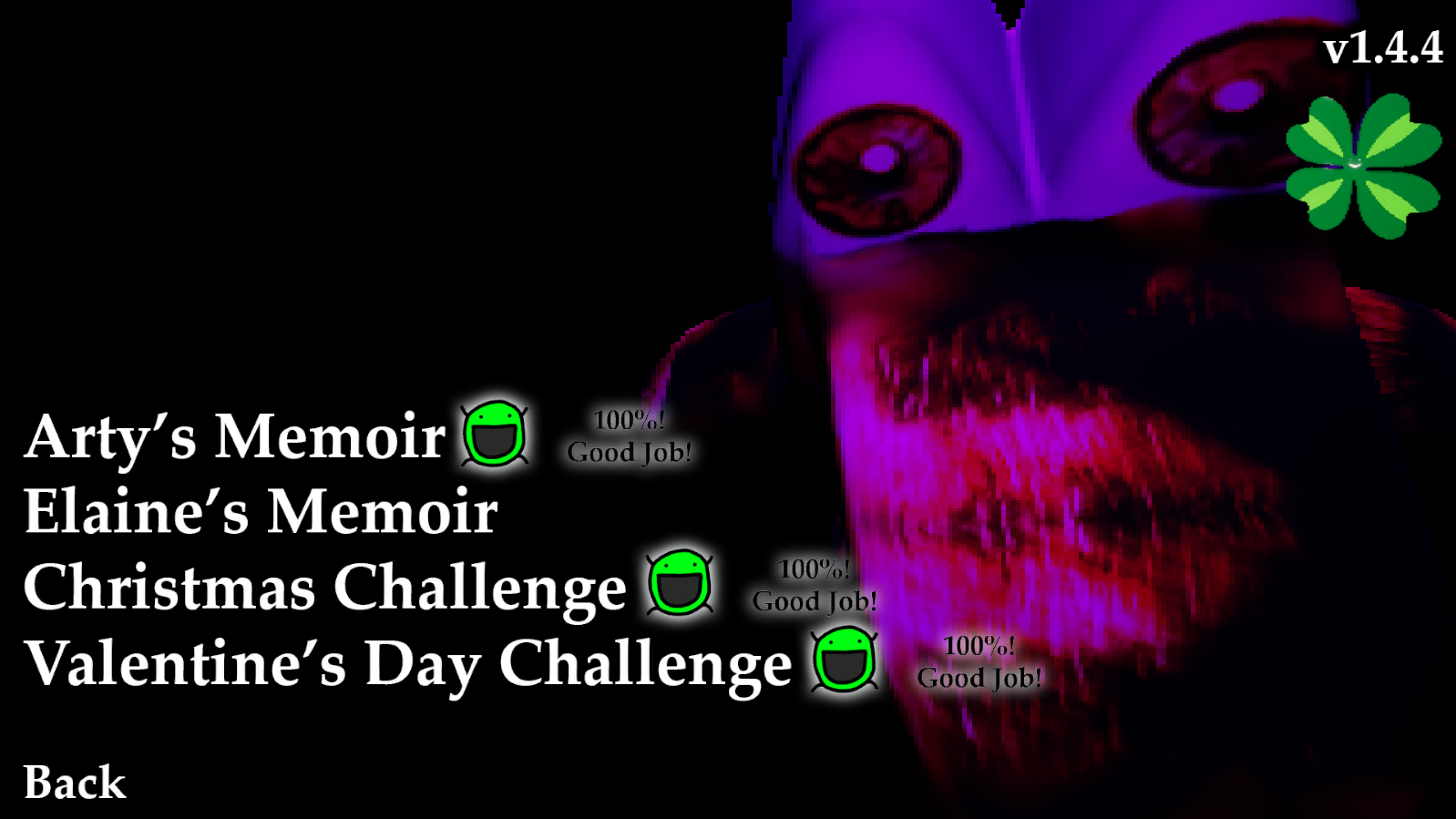 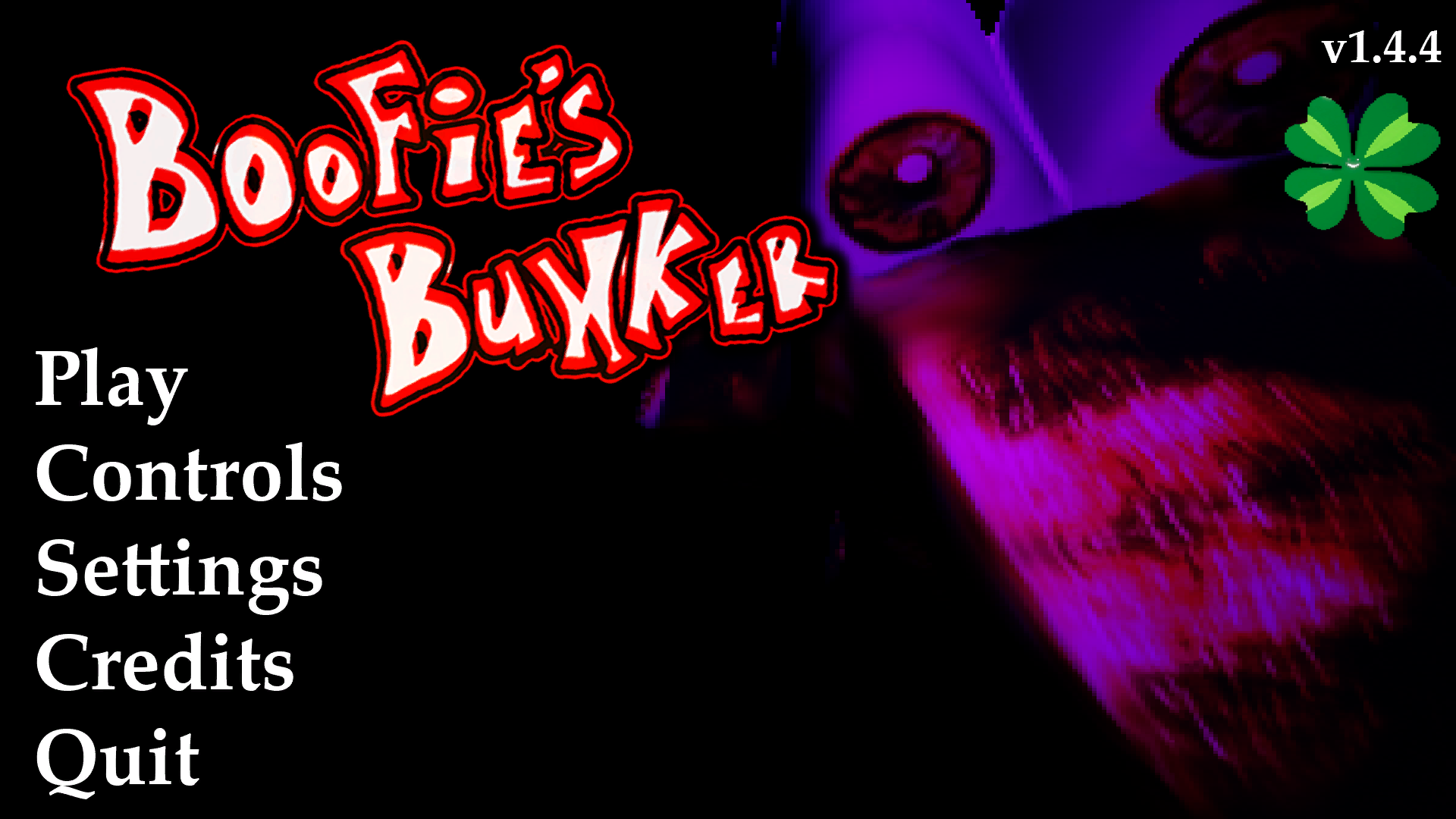 I found a glitch in the kitchen normal mode, where i can only get rid of 1 plank, and i cant find another crowbar.

That's no glitch. Your crowbar broke. Look around for something else that can pry off the other plank. :P

I wanted to play Boofie's Bunker earlier today, but I was disappointed when I saw that the game didn't fit the screen resolution that I had. Could you please make the game compatible with 1280 x 1024 resolution monitors? It would be greatly appreciated. 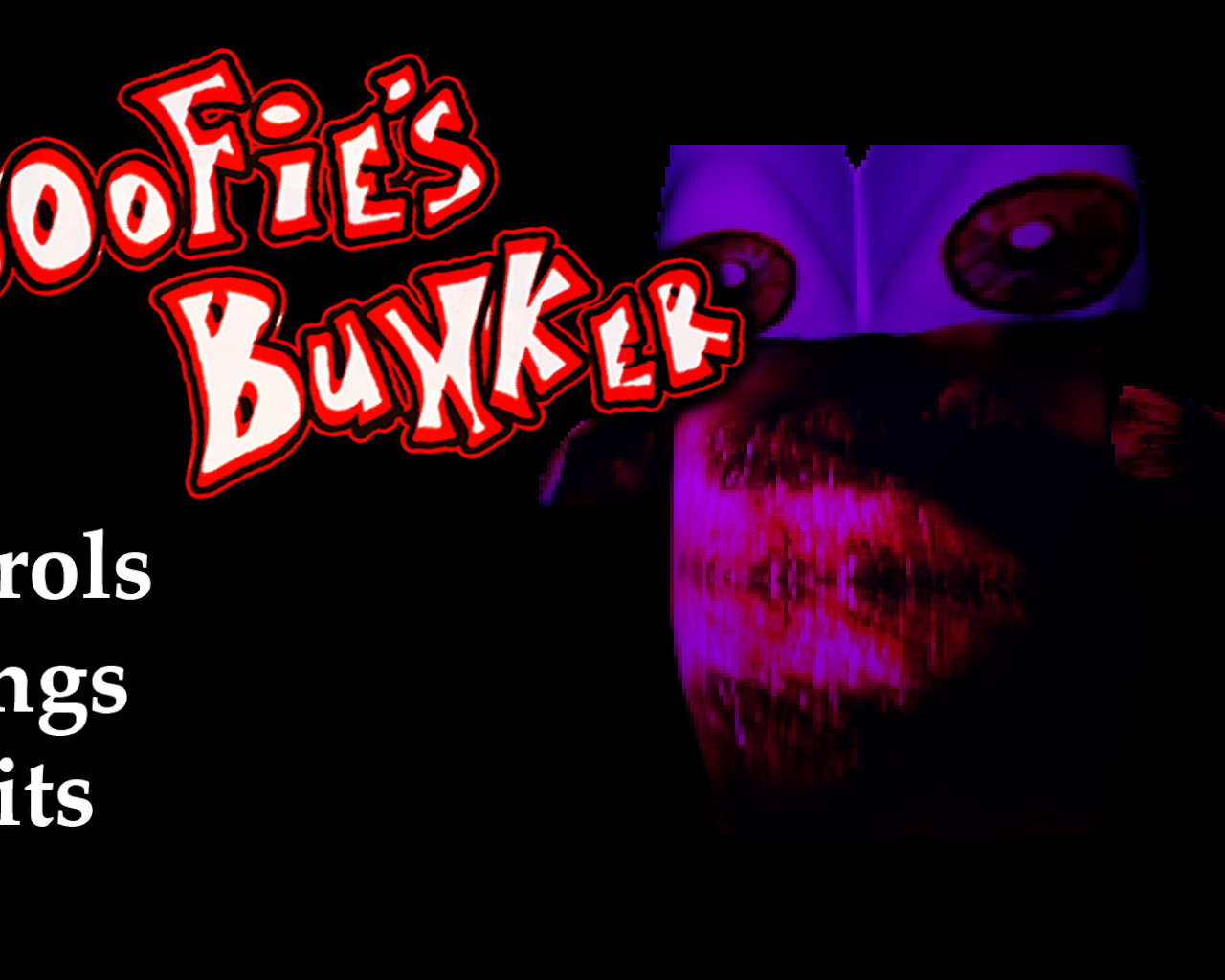 Hmm seems like an issue with your monitor’s resolution. I’ll see if I can figure out a way to work around unconventional resolutions when I get home from vacation. :)

This game is one of my favorites. It is challenging yet fun and can be replayed with Chaos Mode!

Also there is a bug for me in the Valentines Day Challenge where the minimap glitches and it is hard to use it because you can barely see. Please fix it.

Explain with more detail, please. How does it glitch? What does it look like? When does it happen?

Well the map will get dark on some parts making it really hard to see through it but it kind of stops when you turn the settings to low quality. But it is still there and will fill up most of the minimap unless you move your head or keep moving. I'll get a screenshot of it.

Here is a video of it (Pay close attention to the Minimap):

Weird.... I'll look into it, but it seems like something to do with your PC not being able to render the minimap. Can't seem to replicate the issue.

So is there going to be like a guide that helps figure out how to 100% complete this game? If there isn’t, I am probably just going to create one myself and go with that.

I was goofing around in Boofie's bunker which all the stuff I didn't legitimately get, when this happened. I was in Easy bunker, With the fever dream filter on. Boofie spawned, But he wouldn't move. If he saw me, He would chase, But then not move when he couldn't see me anymore. It's similar to that Easy Hedge maze glitch that you fixed earlier this week. 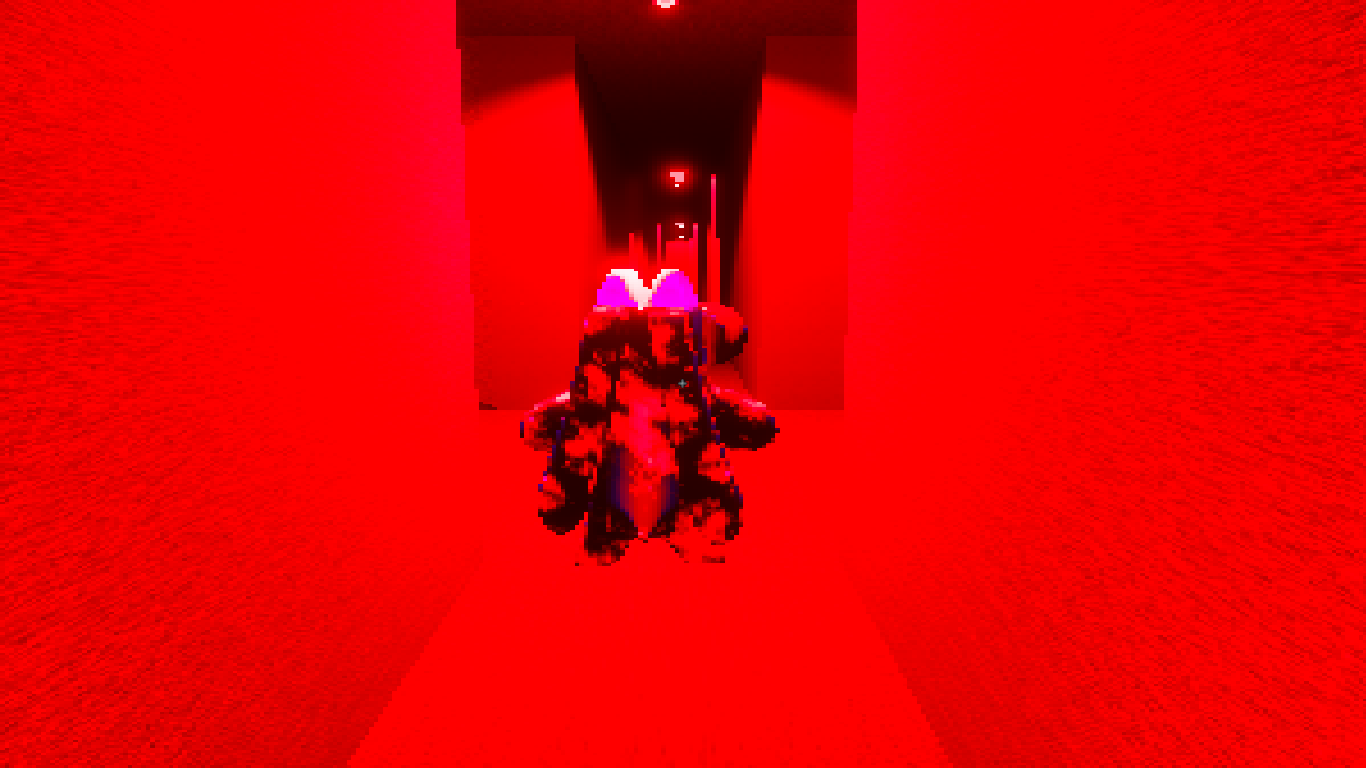 Hmmm, I'll look into it.

Edit: Yep. Same issue. Thanks for showing me!

Hey, do you think it's possible to get some kind of cheats or unlocked save files? I want to try and experience moe of the game, but I'm bad and can't. Choas mode seems fun.

Idk try to Konami Code or something

hey, why can't i get this game? it says that it can't decompress.

Does anybody have the problem to where whenever you try to install the game it just wont work for you? If anybody knows the solution please help me

Just beat the main game 100%, including all hidden characters in chaos, all crossover trophies and all chaos challenges completed (not including christmas challenge, or any future updates) and just message me on Twitter!

So far for the Hidden Characters in Chaos I've found Zipper and the HOW2PLAYROCKRADIO.

Edit: I have all the Secret Char. I am working on the challenge! :D

how do you get chaos mode?

mabey you have a bad computer? like there is no more space on it

Did both Bunky and Tunky made a cameo in this game?

no they are not in this game

Why would they even be there? XD

Didnt realise until i was close to finishing the first play session but this game is big and definitely worth your time. I love one off silly horror games but what you have here is special. Im seriously looking forward to bingeing the bunker once i have some time to dedicate to it!

the game keeps doing the same thing for me (it loads up perfectly then 2 minutes later the music stops working and the game crashes)... i have windows 8. so that might be the issue. but i'm not sure.

Reply
Hey It's Greg187 days ago

As it is their first game release, I expected the "cliche maze game" entry. However, this maze game has some meat on it's bones and has replayablity.

There looks like theres so much to this! I'm raring to jump back in as I only tried it out on easy and didn't even see Boofie. Love the visuals and theres so much content to explore which is great. Everything was well explained through the radios (though I find myself skipping it sometimes if its too long haha). I'm not sure if I was just lucky with the keys but I'm guessing you have to get the corresponding coloured key for each gate, (maybe again cos it was on easy that didn't apply) but whichever one I grabbed each time it worked :D

Very entertaining, well-made game. Mechanics and instructions are well-explained and available. The various games are refreshing changes of pace from each other and are unique and enjoyable.

Extreme mode in the bunker is extremely difficult, but not unfair in difficulty.

I had some challenges with sprint on lower difficulty (like when you drop a key to sprint but have to fill your bar to 100% to sprint first, or if you're at 100% you have to crouch for a split second to be able to sprint) but this doesn't come into play on Extreme because you basically die if discovered.

There's a lot in this game, the gameplay mechanics seem to be well designed, I liked that you need to rest every once in a while and don't use the flashlight too much. I didn't complete the game yet, but I found the arcade, kitchen and dave the microwave, and at least I managed to complete the arcade secret game. I'll probably get back to try and complete the game and also to unlock some more secrets. It seems like there's a lot of those.

It is kind of mechanics-based game, kinda reminds me of FNAF type of game where various evils are doing different things and you have to take care of them. At least that feeling flew over me when listening to the radio for the MicroHorrorArcade game. Which is not really my cup of coffee, but I'm glad the main game only has focus on Boofie, cause it's really more than enough for me at the moment.

A few things I had a little problem with. Sometimes it's hard to tell which key I need to find, the lock seems white but then the white key doesn't work, also the red lock seems kinda yellow and that threw me off a bit too, maybe it's post processing messing with me. I also didn't really like that when I drop the key I never know where will it appear, sometimes it goes to the original position, sometimes it seems that is just vanishes from existence :D

Other than that, all this secret hunting gives me a feel that the game may or may not be oriented towards youtubers mostly, but the game has a ton of content in it and it seems well made as much as I've seen while playing it, of course the dev has played a million horror games already on youtube himself so yeah, he knows what he's doing.

Thanks! I was actually thinking about having each door/matching key combo make a unique sound so you don't have to just rely on colors. The keys always respawn in a random position when you drop them. I'll go back into the game and do some more testing with this and make sure they aren't actually vanishing from existence lol. A few friends and I have tested this game to Hell and back and still keep finding little hiccups, so it isn't unlikely.

Also, you're sort of right. I didn't make it quite for YouTubers. My mindset was to make a game that I was craving. A game that I wanted to play, so I did! I just happened to have been a YouTuber for forever lol. The original idea of the game was to be an arcade-style challenge horror game with a mix of mechanics similar to the classics. Slender, FNAF, Granny, etc. so you're right there too! A lot of the guts of the game is inspired by harder short horror games like those.

Edit: OH! The key respawning in a random place thing was to avoid the player getting an idea to just hoard all keys by the exit. That defeats the whole purpose! They just respawn in any random spawnpoint they would've spawned in originally upon being dropped.

Thanks for the review!

Had a blast trying out this game!  The style details and game itself is really great!  I managed to get scared quite a few time as well!  Definitely recommend playing this game.

As Usual Gameplay from Z9ZGAMES Channel!!
With All Thanks to the Creator of the Game!!

The game is great. But I kinda suck at it. Anyone got any tips for how to avoid boofie other then not being seen?

He can see pretty far, so before walking into hallways he may be coming down, try to peek around the corner with Q or E to see if he's coming. If so, then just go around the other way. Keep an ear out for squeaks and an eye out for the red glow he gives off. You got this!

That's strange. Doors not opening all the way may have something to do with frame rate. I'll take a look at that and see what I can do.

This is certainly a large game that takes time, loved it so far.